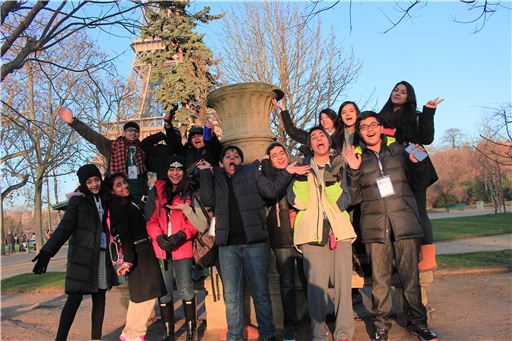 From Sunday December 29 to Monday January 5, a group of 21 students from grade 7 to 11 studying French as second and third language visited Paris for one week. It has been an experience of a lifetime for the students who had the opportunity to immerse themselves into the French culture. The tour was planned in such a way that the students could see the most of the city of lights in a very limited time. The visits included a grand tour of Paris, the Champs Elysées avenue, the Arc de Triomphe , the Eiffel Tower, a cruise on the river Seine, the Latin Quarter, Notre Dame, Pont des Arts,  the University of Sorbonne,  the Pantheon, the Gardens of Luxemburg and the Senate, the Louvre, Disneyland Paris, the City of Science museum, Montmartre, the palace of Versailles and the Opera Garnier and shopping at Galeries Lafayette on Haussmann Boulevard.

Here is how one student describes the Paris Cultural Tour:

Paris is a breathtaking metropolis and we had the privilege to visit this magnificent city on a school excursion with twenty-one schoolmates, two teachers, and the SLO coordinator. For us, this journey was an experience of a lifetime.Despite the flight being delayed, we reached Paris in high spirits. We landed in Paris on Monday morning and we hit the ground running, starting with the grand tour of Paris by bus. On the tour we passed by the Eiffel Tower, the Opera House, the bridge of Alexander the third, the Obelisk, the Grand Palais, and the Arc de Triomphe. After  the tour we had lunch in a  typical Parisian restaurant, where we ate some delicious salmon with mashed potatoes. When we had eaten our fill, we strolled on the well-known Champs Elysées and climbed on the top of the Arc de Triomphe. After a very eventful day we were eager to reach the center and looked forward to resting that night. On the second day, we visited the Eiffel Tower and even went to the second floor where we saw breathtaking vistas. After eating some sweet and savory crepes at Framboise restaurant, we went on a picturesque boat cruise on the river Seine. We discovered all the monuments from another perspective and enjoyed the fresh air on the boat’s deck. Then we got our first opportunity to do some shopping at Italie Deux, a huge shopping center. In the evening, we got to experience a French tradition called the kings ‘cake (galette des rois). On the third day, we did a walking tour of Paris.

We went to the Gardens of Luxemburg, visited the Pantheon and passed in front of the University of Sorbonne. After that we stopped at Notre Dame and put a lock on the pont des Arts to symbolize our love of Paris. We ate some delicious salmon lasagna; before going to the amazing Louvre. We saw some breathtaking paintings such as the Raft of the Medusa by Gericault and Liberty Leading the People by Delacroix, artifacts and of course the distinguished Mona Lisa. Days pass in a blur and sadly half of the trip was already over.

The next day, we went to Disneyland Paris! It was a very entertaining experience and going in the space mountain was a blast. Next on the fifth day, we spent the morning at the Cité des Sciences et de L’industrie. Among others, we saw exhibitions about the creation of the universe, the human genes and the brain. We saw some exotic fish, a shape shifting car, and watched a documentary about French Polynesia at the Geode, a planetarium dome-like cinema. After eating lunch, we climbed Montmartre hill to visit the Sacré Coeur and to enjoy a breathtaking view of Paris. We walked to the Place du Tertre where we got portraits of ourselves sketched by local artists. In the evening, we went on the Champs Elysées to enjoy the lights, it was magnificent and we had a lot of fun strolling on one of the most beautiful avenue of the world. Then, we went to the Trocadéro café where we enjoyed hot cocoa and crème brulée, a real delight!  On the sixth day, we discovered the Palace of Versailles with our guide. We were fascinated by the beauty of the hall of mirrors and we tasted the exquisite Ladurée macaroons! After lunch, we visited the Palais Garnier, the famous opera house which was the setting of the Phantom of the Opera’s novel.  We all got very impressed by the architecture of this masterpiece and mesmerized by the paintings on the ceilings.

Then, unfortunately, our trip came to an end. It was a very depressing moment for all of us, but this adventure will always remain in our hearts. Creating memories, learning about other cultures, and making new friends are vital in a person’s life and that is exactly what has happened during this trip. Thank you ISC-Lahore for this incredible opportunity!